It was recently brought to my attention by Hannah Frick that there are now sooo many R-Ladies chapters around the world! R-Ladies is a world-wide organization to promote gender diversity in the R community, and I’m very grateful to be part of this community through which I met so many awesome ladies! Since we’re all connected, it has now happened quite a few times that R-Ladies gave talks at chapters outside of their hometowns. An R-Lady from Taiwan giving a talk in Madrid while on a trip in Europe and another one doing the same in Lisbon, an R-Lady from San Francisco presenting at the London and Barcelona chapters thanks to a conference on the continent, an R-Lady from Uruguay sharing her experience for the New York City and San Francisco chapters… It’s like rockstars tours!

Therefore we R-Ladies often joke about doing an exhaustive global tour. Hannah made me think about this tour again… If someone were to really visit all of the chapters, what would be the shortest itinerary? And could we do a cool gif with the results? These are the problems we solve here.

To find all chapters, I’ll use Meetup information about meetups whose topics include “r-ladies”, although it means forgetting a few chapters that maybe haven’t updated their topics yet. Thus, I’ll scrape this webpage because I’m too impatient to wait for the cool meetupr package to include the Meetup API topic endpoint and because I’m too lazy to include it myself. I did open an issue though. Besides, I was allowed to scrape the page:

Here I decided to use a nifty package to the awesome OpenCage API. Ok, this is my own package. But hey it’s really a good geocoding API. And the package was reviewed for rOpenSci by Julia Silge! In the docs of the package you’ll see how to save your API key in order not to have to input it as a function parameter every time.

Given that there are many chapters but not that many (41 to be exact), I could inspect the results and check them.

I wanted to use the ompr package inspired by this fantastic use case, “Boris Johnson’s fully global itinerary of apology” – be careful, the code of this use case is slightly outdated but is up-to-date in the traveling salesperson vignette. The ompr package supports modeling and solving Mixed Integer Linear Programs. I got a not so bad notion of what this means by looking at this collection of use cases. Sadly, the traveling salesperson problem is a complicated problem and its solving time exponentially increases with the number of stops… in that case, it became really too long for plain mixed integer linear programming, as in “more than 24 hours later not done” too long.

Therefore, I decided to use a specific R package for traveling salesperson problems TSP. Dirk, ompr's maintainer, actually used it once as seen in this gist and then in this newspaper piece about how to go to all 78 Berlin museums during the night of the museums. Quite cool!

We first need to compute the distance between chapters. In kilometers and rounded since it’s enough precision.

I used methods that do not find the optimal tour. This means that probably my solution isn’t the best one, but let’s say it’s ok for this time. Otherwise, the best thing is to ask Concorde’s maintainer if one can use their algorithm which is the best one out there, see its terms of use here.

And here is how to link the solution to our initial chapters data.frame.

I’ll start by plotting the trips as it is done in the vignette, i.e. in a static way. Note: I used Dirk’s code in the Boris Johnson use case for the map, and had to use a particular branch of ggalt to get coord_proj working. 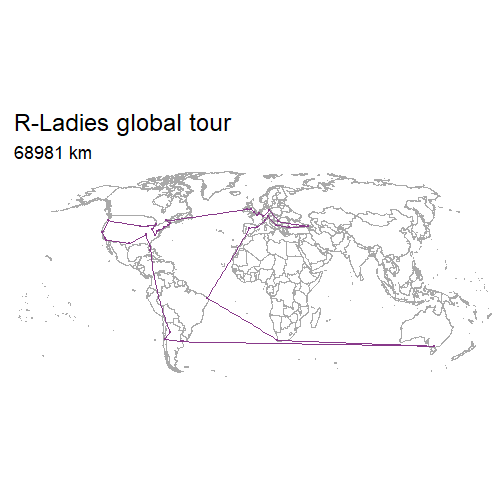 Dirk told me the map would look better with great circles instead of straight lines so I googled a bit around, asked for help on Twitter before finding this post. 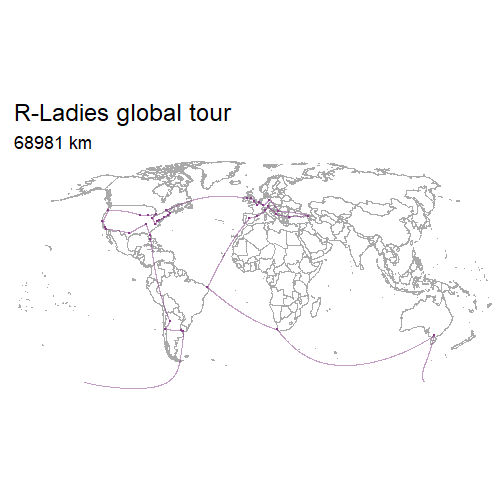 Ok this is nicer, it was worth the search.

And now I’ll use magick because I want to add a small star flying around the world. By the way if this global tour were to happen I reckon that one would need to donate a lot of money to rainforest charities or the like, because it’d have a huge carbon footprint! Too bad really, I don’t want my gif to promote planet destroying behaviours.

To make the gif I used code similar to the one shared in this post but in a better version thanks to Jeroen who told me to read the vignette again. Not saving PNGs saves time!

I first wanted to really show the emoji flying along the route and even created data for that, with a number of rows between chapters proportional to the distance between them. It’d have looked nice and smooth. But making a gif with hundreds of frames ended up being too long for me at the moment. So I came up with another idea, I’ll have to hope you like it!

At least I made a twinkling star. I hope Hannah will be happy with the gif, because now I’d like to just dream of potential future trips! Or learn a bit of geography by looking at the gif.