I am a runner but also a Body Pump enthusiast. Body Pump is a group fitness class of the Les Mills company, in which you train different muscle groups using a weighted bar – whose total weight you modulate with plates in order to adapt it to your fitness level and to the muscle group. Like R, Body Pump was created in New Zealand, what a wonderful country! Every three months, a new class is released, with new songs and choreographies. What doesn’t change is the muscle group trained in each of the 10 songs of each class.

I’ve thought of analysing Body Pump data for a long time now but could never find what I was looking for, which was a dataset of number of “reps” by song, e.g. how many squats do you do in each squats song. Then I realized I could also play with other data, like a quite comprehensive list of songs used in releases. I decided to cross this information with information about style of the corresponding artist in Spotify. Here is what I came up with!

This I did listening to pop music, actually using my husband’s Deezer account. I downloaded data from this page which is quite exhaustive for many releases but well not formatted in a consistent way over releases, so I needed to be patient. A bit like when in the triceps track one does many half repetitions and feels one’s arms are going to fall off.

Then I extracted the track lists, in a non very elegant way. Sometimes one just wants the job done…

What follows is scripted manual correction of some mistakes in the data, or things that makes later extraction of title vs. artist a bit complicated.

After doing this I lied on the floor drenched in sweat / created a tibble.

The next step was keeping only the 10 first tracks by release, ignoring bonus and alternative tracks listed at the end. It also involved removing useless strings that were not actually songs.

After this I extracted the title and artist of each track. I’m not sure why I needed to change the encoding of the string for that, but before trying this solution I was bothered by there being different sorts of dashes and hyphens.

When the artist was in fact two artists, I kept only the first one which I assumed to be more informative of the style of the song.

And I got there:

Note: the spotifyOAuth part of the following lines demands your first getting an Spotify API app client ID and secret as explained in the README of the package. I saved these as environment variables in my .Renviron.

Track 3: making sense of the genres of artists

As one sees above, each artist can have several genres and there are a ton of possible genres. When googling a bit about Spotify music genres, I found this gem of a webpage. Impressive! In my case, I wanted to have a few groups of musical genres in order to link them to the track, e.g. is there a musical genre more representative of the biceps track as opposed to other tracks?

I decided to cluster the artists based on the binary variables for each genre. For this I used the klaR::kmodes function because k-modes is a method for clustering based on categorical variables as opposed to k-means for instance. In work that I don’t present here, I played with 1) the number of clusters, looking at the resulting total sum of within-cluster differences and 2) the minimal number of artists that should have a genre for this genre to be included. For instance if a single artist has the style “francoton”, then I don’t want to use it for clustering. In the end, I was quite happy with 6 clusters and keeping only genres that occurred more than 10 times in the data. Doing this there were some artists I couldn’t cluster since they had only been described by very rare genres.

Before clustering I had to transform the data a bit.

Then the clustering happened.

I then tried to characterize each cluster by its most important genre, well one of them. It’s as arbitrary as the rest of the clustering but I needed to summarize information anyway. I’d be glad to hear about other ideas for categorizing artists!

Once I had my categories for some artists, I was impatient to look at their proportions depending on the muscle group. I first prepared the data in order to have meaningful names for clusters and tracks.

I first made a figure of the number of missing values i.e. missing cluster by muscle group. Sadly some muscle groups seem to have more missing values, hopefully the sample I do have for them is representative. Note that in total I have 42 releases. 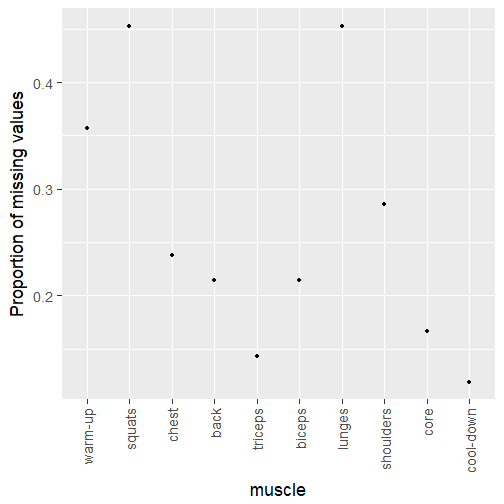 And then I looked at the musical genres by muscle group. 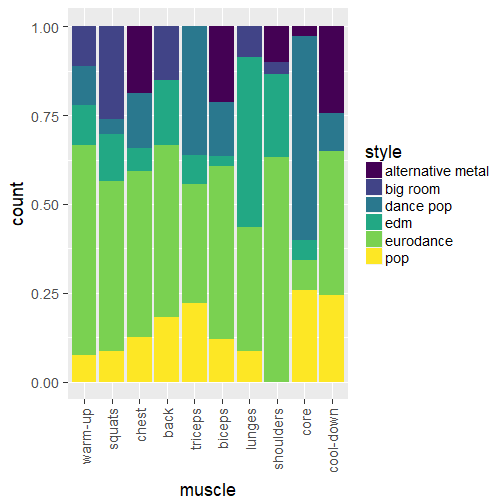 So, is this interesting? I’m not exactly sure, ah! It seems that the shoulders track is associated with less pop or dance than the other tracks, maybe because overhead presses demand more rythm? Cool down does seem more quite with no electronic music (edm and big room) which makes sense. All in all, I was happy to see this plot but would like to have a better categorization of songs and well less missing values. I’m not a good musical analyst yet! Oh and I’d love to get data about beats per minute… Maybe in a next release of this post, by me or one of you dear readers? Oh and if you want music that’s more quiet, check out this post of mine about Radio Swiss Classic program!